Fiona’s weekend adventures began Friday night, when she had a rematch with a skunk in the backyard.

My mother, Kay, had mocked me after the first battle, when I purchased an Emergency De-Skunker Kit (Read as: Two bottles of hydrogen peroxide and a spare box of baking soda) but lo and behold, two months go by and there it is.

On Saturday, Kay planned to take Gibbs to Splash Dog for a swim – more on that later – and since I was at a yoga class, Fiona tagged along for the ride.  Very nice of Splash Dog to let her hang out.  Then today we went to another charity dog walk – this one for The Puppy Mill Project.

I am not an active supporter of the group for a couple of reasons, one of them being – and I am not proud of this – that I just don’t like to think about puppy mills.  I am already active in the rescue world with my time, my money and the pets in my house.  I don’t need to be converted.  However, I understand that there are a lot of uneducated people out there and The Puppy Mill Project sets out to educate them.  I am grateful for the work they do and the least I can do for them is show up for a dog walk.  And it was a big one:

I snapped this shot after finishing the walk, heading back to my car.  There were so many people that after we had finished, stopped for water and chatting  – people were still coming back.

The Dog Saving Network was onsite raising funds with a Spin the Wheel game.  The wheel was spun by a dog.  Several dogs, actually – they took turns.  For $3, I was all over seeing that.  And I won, thank you very much.  A new toy for Gibbs. 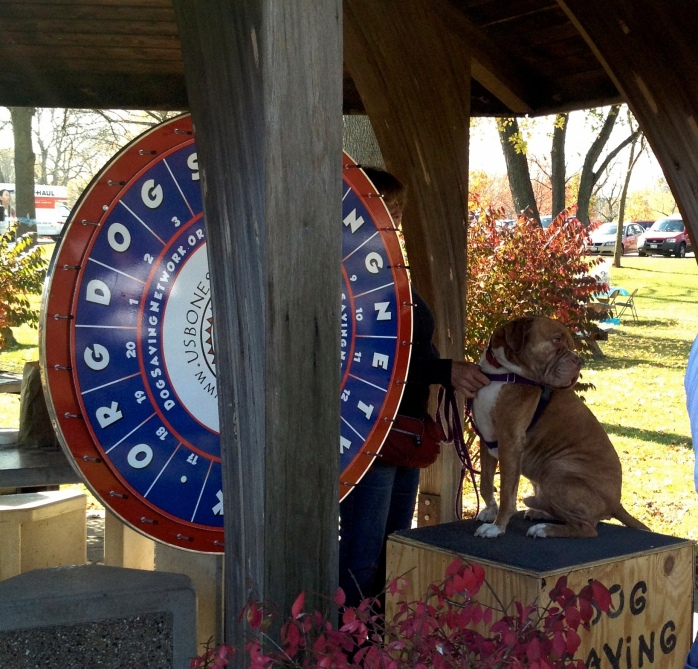 We skipped the Halloween contest, but there were lots of dogs in costume.  I liked the Corgi-Lobsters:

And Fiona found this pretty impressive:

It wasn’t a terribly long walk, but it was a lovely day and Fiona and I had a great time meeting people and dogs.  So far, they have raised over $10,000 on the First Giving site alone.  I also expect there were a lot of walk-ups today with the fabulous weather.  And shout out to Wags on Willow, our favorite brick-and-mortar pet store.  They sponsored the event in some way because I found their information in the goody bag!

If you would like to contribute to the Puppy Mill Project, my page is still live right here.