It’s been over a month since I returned from Scotland and have discovered that I am past the point of being able to blog the pictures effectively.  So here are the highlights. 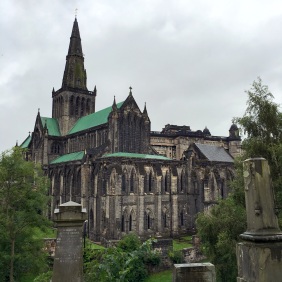 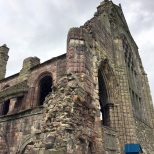 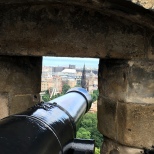 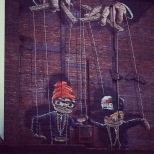 I am sorry to say I am too tired to post about my day – the trip to Niagara Falls.  But I managed to upload the pictures, if not edit them.  Sorry about those people that got into my view.  I believe if you click on the photo, it will take you to my Picasa site.  Then you can see it in full screen.

I am home; had a horrid trip back.  Haven’t decided if that is worth writing about yet.

These are the pictures, if anyone cares to see the whole thing.  They really look better in full screen.  Couldn’t much be bothered to edit, so feel free to move along:

I tried to keep to something resembling my average weekend schedule while on vacation, so I was pretty much up and out around 8:30. As Rich and Jodi are rather nocturnal types, I was on my own for breakfast.

Rule #1: Skip the beignets at breakfast time. Café du Monde is a mob scene first thing in the morning and anyway, there is no way to avoid spilling powdered sugar all over one’s fresh black clothes.
I happen to have a favored coffee shop on Chartres Street that has chocolate croissants. Except I couldn’t tell you the name. The locals were chatting with the staff about a shooting on Bourbon Street the night before. It sounded very much like the average CPS gang event in Chicago and the lament was that it happened in the “tourist mecca”. Anyway:
After coffee, I headed to Jackson Square to read my book in the park. I walked by a guy sitting on a bench. He was eating an apple and looking at a camera on a tripod several feet in front of him. I hoped it was his tripod.
As I’ve said, I have been to New Orleans several times before, but I hadn’t taken any pictures. I felt lame taking the standard tourist shots, so I decided I would take pictures of things I hadn’t seen (or hadn’t seen quite that way) before. I recalled Jodi saying when she first arrived that she had expected to see trees like those in Savannah – I presume she meant with Spanish moss – but instead she saw the palm trees. I thought that I couldn’t quite recall having seen palm-like trees in New Orleans before, but there they were. 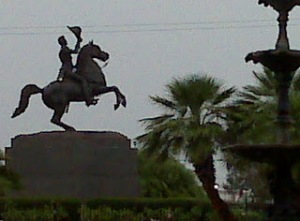 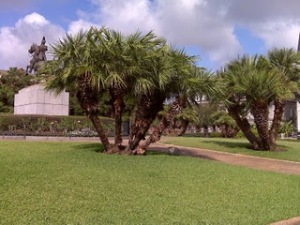 So I took a couple of random pictures with my phone and then sat down to read.
Out of the corner of my eye, I saw tripod guy get up and walk over to his tripod. And look through it. And sit back down. And do it again. And stand around for a minute and then sit back down. He must have been waiting for the sun to do something on the statue, but I have no idea what it was. I was tempted to ask, but was afraid that one of two things would happen:
1. He would peg me as a bourgeois touriste and give me the stare of disdain, or;
2. Go all artiste and explain it to me in all sorts of detail
So I read my book for awhile. When I decided that I had been in the sun for long enough, I packed up and left. He was still there. 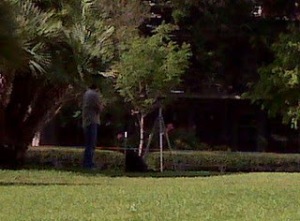 I felt stupid about not taking the picture of the fountain, so I went back on my last day in town. On the approach: 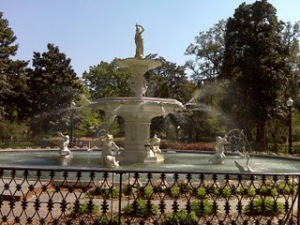 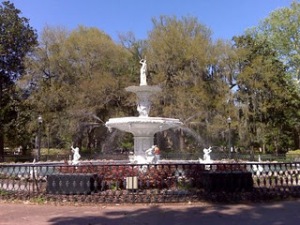 I just can’t get into it. I prefer the pictures from Fort Jackson. 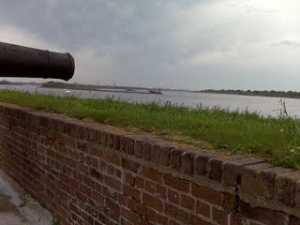 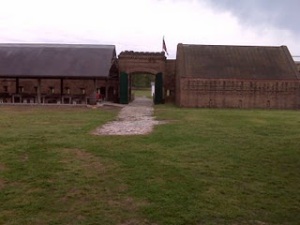 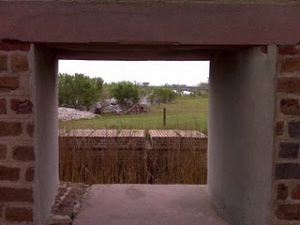 Joy and I went there on Sunday, on the way back from Tybee Island. Where I almost got my rental car ticketed because Georgia is not a friendly parking state.

Anyway. I am now exhausted and have to get to the homework. I didn’t slack while I was away, but we only have two weeks left in the semester. 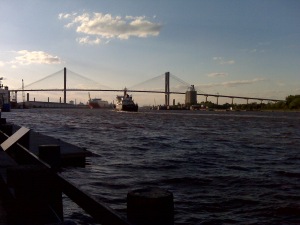 I’m still trying to get a decent picture of a container ship. Somehow, in my head, my nephew will get a kick out of seeing one. But I haven’t seen one in two days. That’s what one gets for sitting in meeting sessions. Although interestingly enough, USA Today said this morning (or maybe it was yesterday) that the numbers in the port of Savannah are down.

Here’s something worse. Joy and I walked over to Forsythe Park before dinner. I am not much impressed by fountains, but the sun was just breaking through the clouds as we were walking up the path and it was all framed with the trees and the Spanish moss and I pulled out my camera but there were too many people and I was too far away and by the time we were close enough the sun was gone and the moment had passed and I was all disappointed and didn’t bother to take a picture of it.

It seems I went all artiste for five seconds. I am rather disgusted with myself.

Monday night Must See TV has messed me up so that I couldn’t even pretend to do homework. But I managed to talk the Blackberry into coughing up the pictures I took at St Bonaventure yesterday:

I actually like these because they catch the contrast with the foliage. It messes with your head. I don’t remember it messing with my head before. Maybe because the other couple of times I visited were in the summer?

What I am Reading Now

I’m sure I don’t have to tell you this, but the views expressed in these pages are mine alone. They are not meant to speak for my employer, my schools, the charitable organizations that I support, the sports teams for which I root, or my mother.
The Next Dark Age
Blog at WordPress.com.