I was back in Washington this week and tried two more food trucks:

I was ready to walk right by DC Taco Truck when I saw the sign that said, “Fresh Avocado”, for which I am a total sucker.  They offered chicken, steak, shrimp, vegetable..and I am probably missing one.  Also, there were two types of sour cream.  I ordered two chicken and one steak, with the milder sour cream.  And they also came with a lime wedge:

They look awfully green, but that is because I asked for no pico de gallo.  Luckily, Stefphanie brought back two small containers of hot sauce and I used some of that.  OK.  Five drops.  On each taco.

We agreed that the chicken was better than the steak, and that DC Taco Truck is worth visiting again.  Three tacos were $9 and they take Amex.

Across the street from the taco truck was a cupcake truck I have not tried before – Cupcake Joy.  Lemon was on the menu that day, so I tried it:

The bright frosting made me a bit nervous, but it was very tasty.  Incidentally, the flavor of the day was Sweet Potato, which doesn’t interest me in itself.  However, I am always encouraged when a bakery is doing the southern thing and if I see them again, I will go back.

Finally, we went back to Central Michel, my new favorite place in town.  I remembered that I’d had a fabulous dessert, but didn’t remember what the heck it was, so I ordered the Celebration Cake: 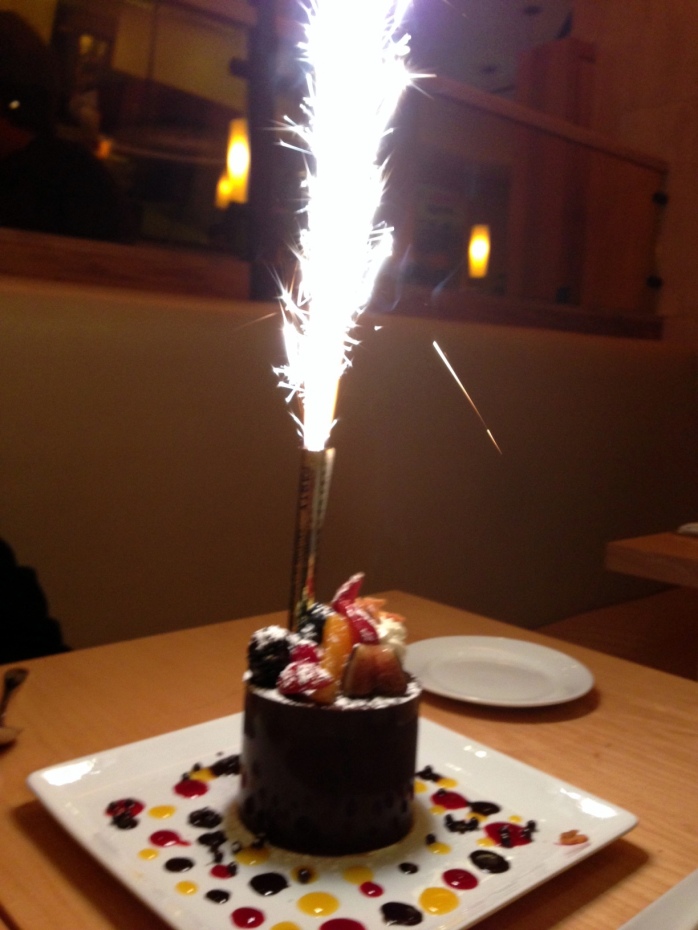 Yeah.  I would have remembered ordered a flaming dessert.  We thought about it while we were eating, and determined there must have been an apple tart of some kind that wasn’t on the menu just then.  (A review of an earlier blog post confirmed.)  But we totally demolished this:

Credit to Stefphanie for the cake pics.  We agreed that it is completely acceptable for us to go to this place and order exactly the same things every time we are in town together.

Category: Not a Foodie, Travel, Washington