I made a chopped salad for dinner. My mother asked where I got the recipe.

OK, fine. For your amusement, here’s the salad for lazy people that are also picky eaters:

So. First I dump the bag of lettuce into my biggest mixing bowl. Then I cut up the cucumber the way my daddy taught me (before seedless cucumbers were invented). Use a carrot peeler to peel the skin-

I read somewhere that if you are not eating the skin of the fruit/vegetable, that organics are really unnecessary because the bad chemical-whatever doesn’t get through to the actual vegetable. I just don’t enjoy the texture of cucumber skin.

Then slice it in half, long-ways. Take the utensil of your choice and dig out the seeds. I once used a spoon, but am now too lazy to walk acroos the kitchen to get one. So I used the knife, making my mother happy about washing one less thing. My father would hate it because he is convinced that I am going to slice off a finger, the way I cut produce. Good thing he didn’t see me with the chicken and the kitchen scissors. Once the seeds are out, slice in half long-ways again, then chop. Repeat for the rest of the cucumber.

Toss in shredded carrots. I just bought a bag, but I am not above using my baby Cuisinart for the job.

Add bag of chicken. After I used the kitchen scissors to open the package, I used them to chop up the chicken a bit further. Because it is a chopped salad.

Add in some craisins. Enough so the pretty color stands out. Or something.

I mixed the salad up and then filled a bowl so that my mother could take some to work tomorrow. Before croutons and dressing.

Then I added croutons and dressing. The secret, for me, to the salad dressing, is use less than you think you need. Because you can always add more.

Then I mixed it all up and this is what it looked like: 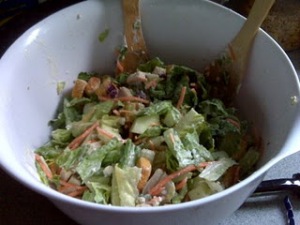 Actually, it looks pretty pale. But that’s what happens when you use ranch dressing. But I thought it was very tasty.

I had a bowl, my mother had a bowl, there was the one I set aside and there was some left over. So I am going to say this makes four bowls of salad. We also had some odd, but good pumpkin bread from a new bakery in town and it was a nice, light spring dinner.