Again With the Cupcakes

I was wandering around the old neighborhood in Park Ridge – that would be my old office neighborhood – and marveling at all of the new stuff.  I was stopped in my tracks when I saw a cupcakery:  Mrs. A’s Cupcakes and Cookies.  So I went in, determined to buy only two.

I asked the nice lady behind the counter: which was her favorite?  Yellow cake with chocolate buttercream frosting.  Which is also my favorite.  “But you were looking to try something different?”  Yes.  She said the Red Velvet was the most popular, but she suggested the Salted Caramel or the Lemon.  Sold. 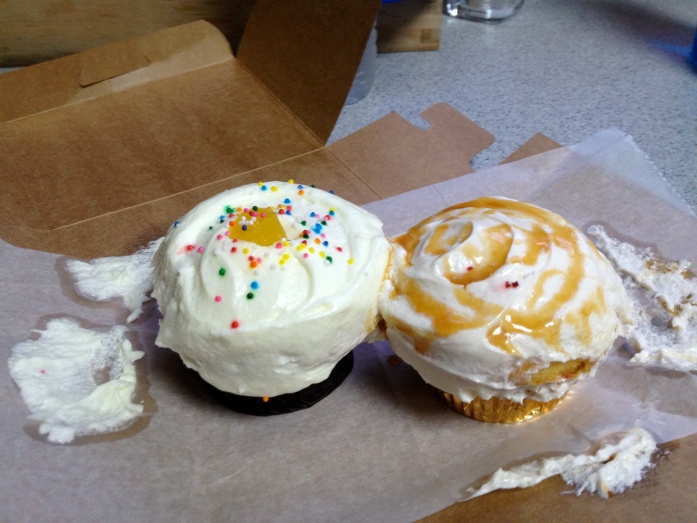 Before you say Ew!, the lady asked if it would bother me if the cakes touched and I told her it would not.  I brought them home to share with my mother, Kay, but couldn’t decide which one I wanted, so I cut them in half.  The salted caramel was a yellow cake with cream cheese frosting and salted caramel on top.   Kay determined it was tasty, but not necessary to the universe of cupcakes.  I thought I would have matched salted caramel with some kind of chocolate – either cake or frosting.  We agreed that the cake part was extremely good.  Kay decided that swapping the frosting with Betty Crocker in the can would improve it to near perfection.

The lemon was a yellow cake that seemed to have a lemony flavor, but the frosting was where the lemon really came out.  I loved it.  Lighter than the average buttercream, which is appropriate for a lemon flavor.  Kay agreed that it was the better of the flavors, but still seemed skeptical about the frosting.

Category: Not a Foodie