The idea for staying in town was that there are plenty of walkable places to go, so as to eliminate the need for a rental car.  First, we have the Hulihe’e Palace (run by the Daughters of Hawaii): 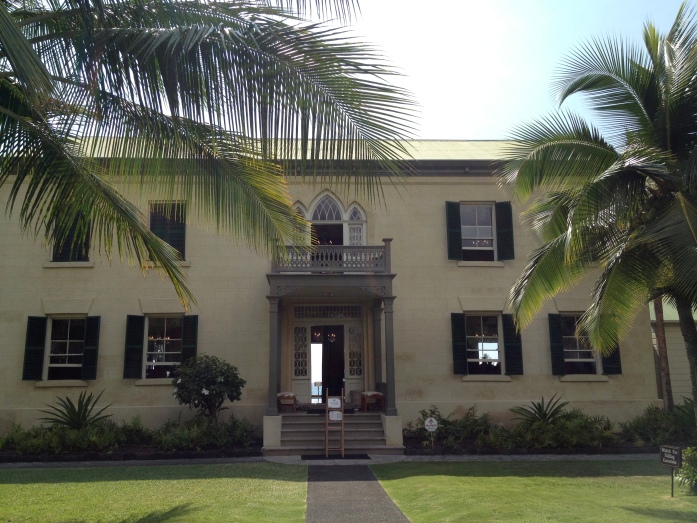 Pictures are not allowed inside, but it is a lovely place across the bay from the hotel.  It only has six rooms, and no plumbing.  But the hardwood is gorgeous and the view is fabulous.  Apparently, Princess Ruth would actually sleep outside in a tent.  There is also a hen and rooster that seem to live there.  Across the street is the site of the first Christian church: 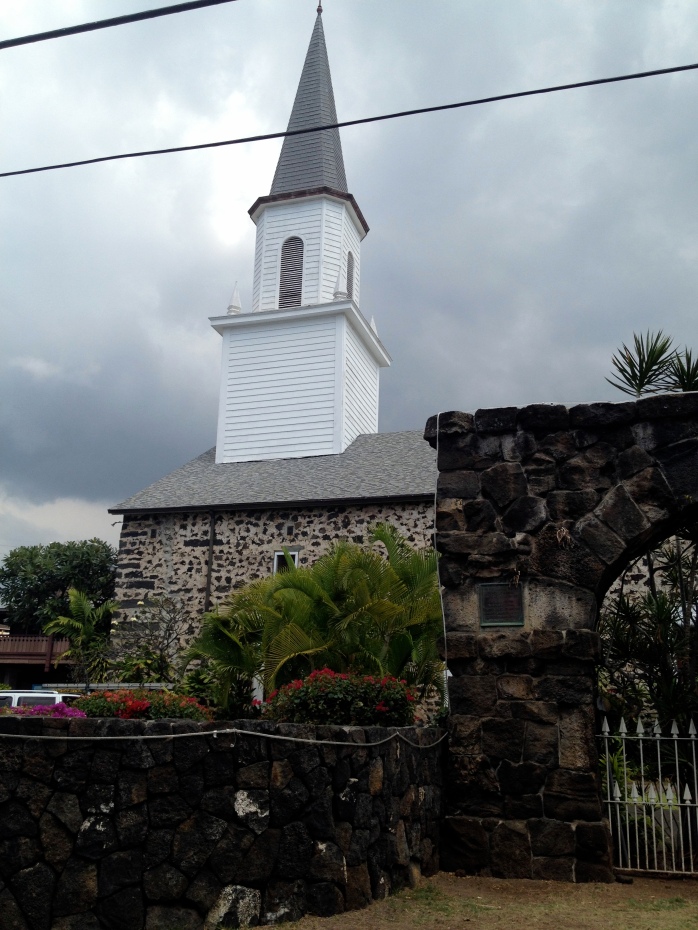 The missionaries arrived in 1820, just after the death of Kamehameha the Great.  This structure was built in 1838.  It is a very simple and pretty building that continues to offer Sunday services.  About a half block down the road is the place where I went for Italian sodas most days and this is my friend the gecko: 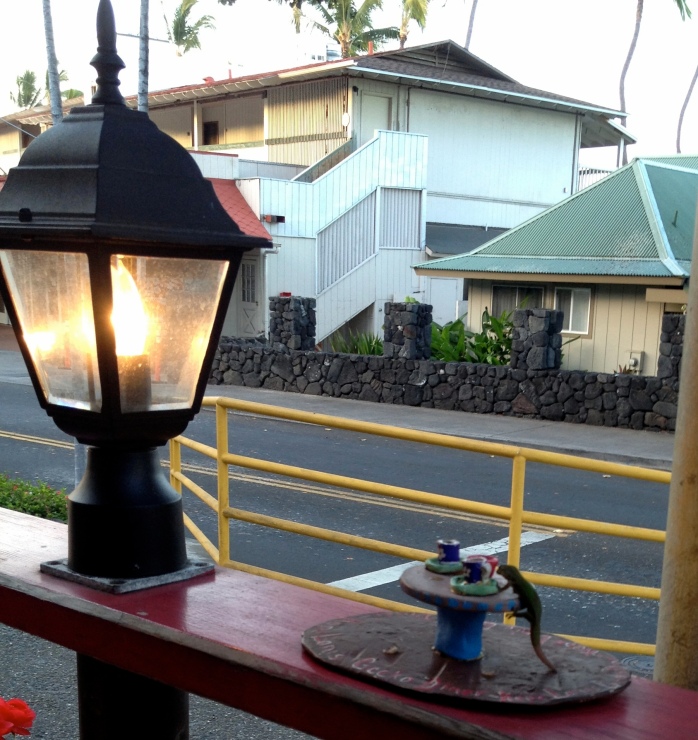 See how they made him a table of his own?  Directly across from that was one of those trees that I can’t get over: 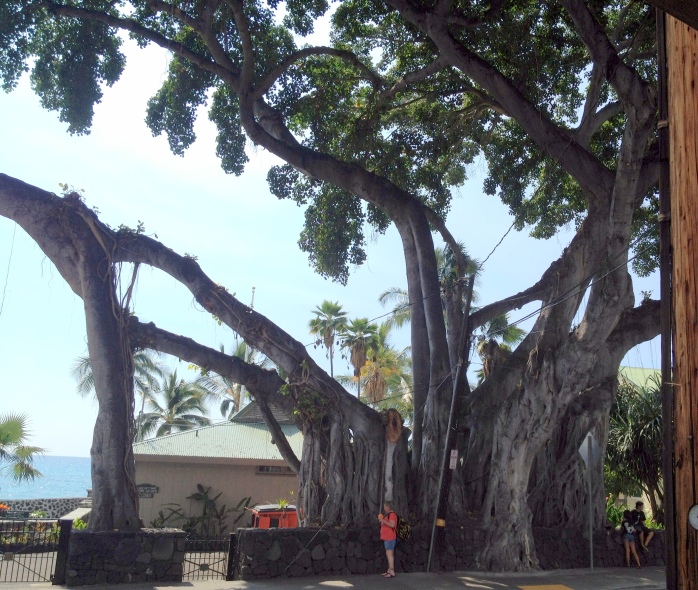 On the way back is a small public beach.  There are always a few early birds, that seem to swim before heading to work (including a volunteer at Hulihe’e Palace) but on Saturday it was totally jammed with people.  And two dogs: 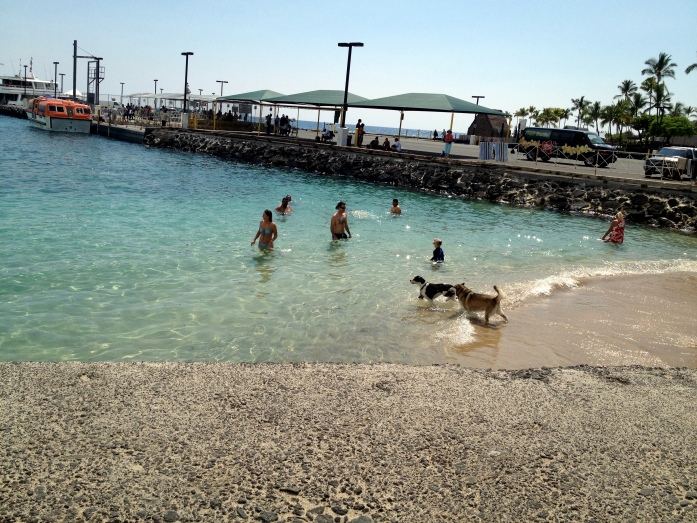 The tri-color is a terrier of some sort and his person would toss a ball into the water for him to swim out and retrieve.  It seemed like everyone in Kona had a dog, including the homeless people.  Last, we have the view out the back of the hotel.  I think this is where they would hold the luaus.  It looks like a place for a human sacrifice: 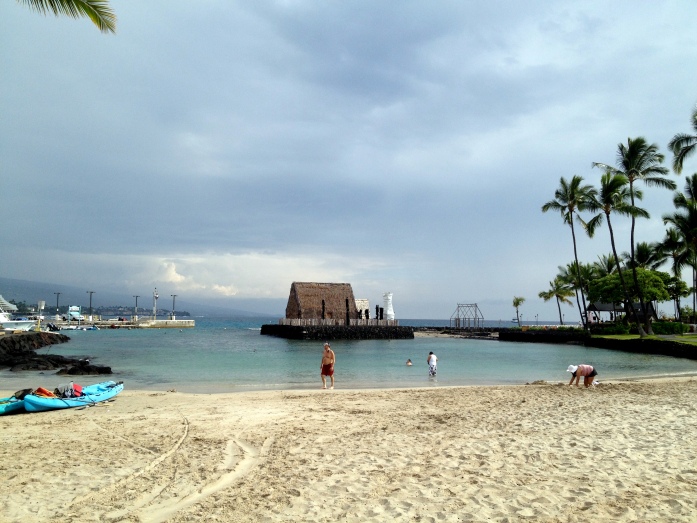 I am glad that I stayed in town this time, but I am not sure I would do it again.  The cruise ships dropped anchor there and the crowds were horrendous.  Also, there was some pretty unpleasant construction noise.  If I end up back on the big island, I will go back to staying up north.