When I picked up Gibbs at Doggie Do Rite Friday afternoon, I told Stacy that I was a bit worried because Gibbs (all play all day) is not interested in playing with Fiona.  She had tried to engage him several times and he barely blinked at her.

“He is snubbing the new girl,” Stacy said.

That lasted about one more hour before they were tearing around the yard in such a fashion that there is still mud all over my house.  Here is one of their favorites: 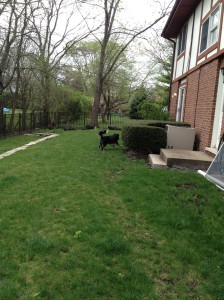 First, Gibbs takes off down the side of the house so fast I didn’t see him do it.  But Fiona did.  “What are you doing in there?!” 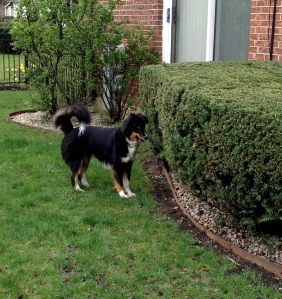 “Waiting to pounce on you!” 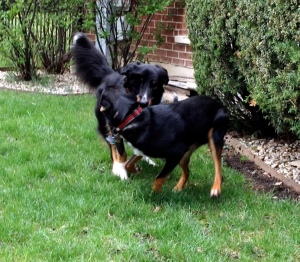 Don’t feel sorry for her – she has twice pounced on him when he was trying to pee.  Don’t feel sorry for him, either.  She was lying in the grass and he sat down four feet away.  She looked at him, and he picked up a hind leg as though to scratch his ear.  When she turned her head, he jumped on her back!

In other news, I took her to meet Mary at Wags on Willow on Saturday.  She was perfectly behaved.  But she doesn’t like the three story tall hot air balloons outside the Verizon store.  Can’t blame her.

Finally, Fiona met my brother’s kids this weekend.  While it wasn’t a perfect scene – she barked too much and took off out the front door when we tried to leave for lunch – she did very well.

Next up this week – I have a business trip, so Mom is handling the two on her own.  Also, she has her evaluation at Doggie Do Rite.

I think she’ll do just fine.

← The Elegance of the Hedgehog, by Muriel Barbery
What Happens When I Actively Try to Travel Light →