“This too, shall pass” is not a mantra that works for me.  It is for more patient people.  However, “This will make a good story” rather does.  Luckily.

So I embarked on the four-hour sunset cruise because:

The issue is that I am prone to motion sickness.  However, I had never gotten sick on a boat before.  I figured if I stayed on the upper deck in the open air, I would be able to manage.

Strike One:  Assuming that an hour on Lake Michigan = four hours on the Pacific Ocean.

When I arrived at the pier, there were plenty of anti-nausea meds available.  The crew highly recommended it.  I declined because:

Strike Two:  Ignored the warnings and declined the meds.

So we embarked.  And I did, in fact, see some whales: 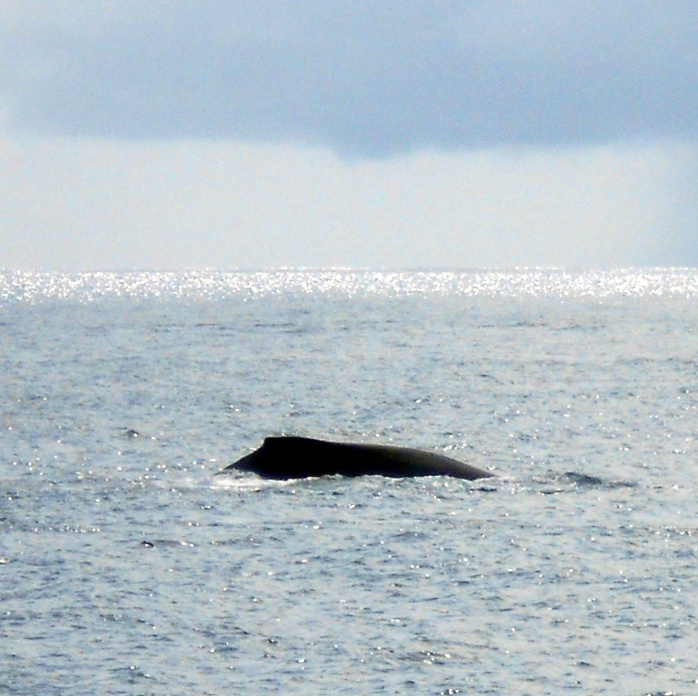 Even if good pics were hard to come by.  Seriously, the experience is so much better when one isn’t trying to get the perfect shot.

And there were dolphins:

And it was awesome.

Strike 3:  Trying to focus a camera.

Alas, about a minute after I took this shot:

I was throwing up all over the upper deck of the boat.  After the crew quickly and quietly cleaned it all up, a young man came over to check on me.  I said I was hanging in there.  “Are you sure?” he asked.  “‘Cause you really got some distance there.”

And then it started raining.  I was afraid to move from that seat, even as it started to pour and we couldn’t have been more than 90 minutes in to the cruise.  I wasn’t the only one looking green, so I was hardly alone up there.  But I was the only person that vomited.

So I saw the famous caves, all Pirates of the Caribbean or whatever, but I wasn’t taking the camera back out.  By the last hour, I was shivering and my feet were blue (which I knew because they ask you to go barefoot on these cruises).  There was lightening before we disembarked.  My teeth were still chattering when I got back to the hotel room.

Today, I was planning on taking the Fern Grotto cruise.  Besides still feeling vaguely nauseous, it is still raining, thus the blogging.  I ran to the grocery store this morning, so other than a 3pm at the spa, I am not required to move for the rest of the day.

If the weather clears up, I can do the Fern Grotto and the rum plantation tomorrow.  If I pull that off, I will pretty well have seen all that is required for a trip to Kauai.

And now, there shall be ginger ale.

← Kauai – Day Three
How I Manage the Travel Expenses →