I believe I mentioned when we adopted Gibbs that his doctor told us he had odd dew claws.  Specifically, one was a double – with two toenails pointed in either direction – and both were very loose.  “Out flapping in the breeze” is the way she put it.   She recommended that when we had him neutered, we should have those removed.  Apparently, when dew claws are wobbly like that, they can tear and it is very ugly when that happens.

This afternoon, ten days before scheduled surgery, he tore one.  When I picked him up from camp, the staff told me that it was bleeding.  They had wrapped it up, but…

I called the vet right then, confirmed they could see him and headed over.  Jeff, our favorite tech, took him back.  After a minute, I heard Gibbs cry.  Twice.  Three times.

A staffer  that had been back there said they had given Gibbs Novocaine, so the cry was probably scared as opposed to hurting.

Bottom line: they patched him up, but he tore it for real and we will be doing his surgeries tomorrow.

Moral of the Story:  Removing the dew claws is not always a “cosmetic” thing.  When the vet says to do it, don’t fool around. 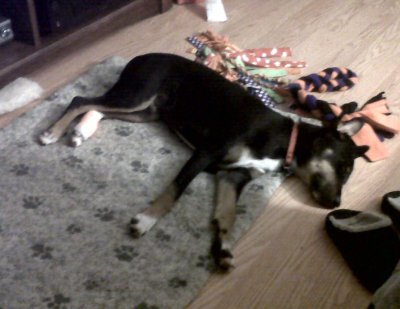