My mom’s friend Miss Gayle is a semi-professional artist specializing in pets.  She just launched a website

so I thought I would give her a Shout Out.  This is the piece she did several years ago of my Late Great Dog Dallas: 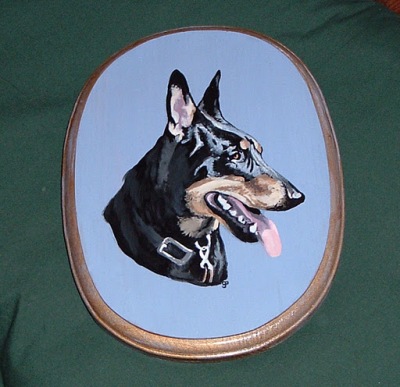 It is particularly precious to me because Dallas died far too young and I don’t have many pictures of her at all.  It is painted on a wooden plaque from a digital picture that my mother, Kay, took and e-mailed to her.

Side Note:  Kay wants you to know that you will not find this work featured on the web site because it was Miss Gayle’s First Commissioned Portrait.  Christmas of 2004, I believe it was.  As though I should put it in a vault to sell when she hits the Big Time.

As if I would ever sell a portrait of my dog!

I think the better point there is that if you think this is good, you know that six years later her work is even better.  Now if only Kiwi the Grey would sit still for five seconds…

Category: arts and crafts or something, Great Websites, pets