Because I Don’t Want to Talk About Election Returns

I have heard that some dentists were doing a “swap your candy for” thing for kids.  But Noodles is doing it, too.  I would totally take Alex to do this, but I am sure he has figured out that he is not required to give up his loot in order to have Noodles with Aunt Anne.  And anyway, I would never get back home in time for kickoff.  But in case you have a kid and too much candy, the ad says Sunday, November 9 from 11am to 9pm for kids 12 and under. 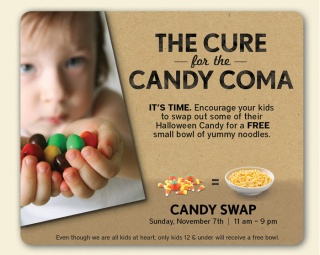 In other non-news, the new quiz going around my Facebook crew is about which D&D characters we are.  It seems I am a Rogue.  And all of my friends are Rogues, too.  I never played true D&D, but I am pretty sure that’s bogus.﻿  But it killed five minutes between refreshing the elections results.  That I am not going to talk about.
I had lunch today with a colleague from Fargo.  In between not talking about election results, we talked about football.  We have agreed that the Minnesota Vikings have gone from desperate to idiotic.  Waiving Randy Moss for being a showboating punk?  You hired him because he is a showboating punk!  Whatever, Dudes.  I didn’t want my team playing against him, anyway.
I am still reading that book

.  The kid was finally arrested so I am hoping it is all downhill from here.  Or I will not make the 50 Book Challenge.  I even made that when I was in school!
Holiday Creep has officially made it to October.  I saw Christmas decorations on a house in my town last weekend and eggnog lattes were already at Starbucks.  The holiday-scented stuff also hit Bath and Body Works, so I shall smell like a candy cane until after the New Year.
My travel schedule is set for the rest of the year.  And it seems I will be half a segment short up reupping my Premier status.  How the heck can you be half a segment short?  Seriously, though, it would be less expensive for me to spend a day flying someplace stupid to get the status than to pay to check bags for an entire year.  If I have to fly to De Moines during my vacation…