Seriously, people.  Don’t come to this town in August.  It is 98 degrees.  I tried to go out after work and made it as far as the Air and Space Museum – across the street.  Thankfully, it is open late in the summer.  I haven’t been there in a very long time.  I like it a lot, but not enough to fight the crowds on the average day.

I have this weird habit that I imagine is the last breath of my maternal instinct coming out:  I find myself looking around wherever I happen to be and asking whether Alex would like it.  At that moment, I happened to tilt my head in the direction of the 747 and thought, “Whoa.  Yeah.  He would.”

He’s still too young.  I think we have agreed that I will bring him here when he is 10.

There were too many kids running around and I started to smell dirty diapers and had to leave.  So I sat down on the steps facing the mall and saw another artistic structure that I hadn’t noticed before:

A big pole with some spindly things at the tops.  And some birds perched on it.  I am not even going to look up the meaning of this.

Then I gave up and went to find something for dinner.  Which reminds me.  At lunchtime, Stef took me over to Chinatown to the other cupcake bakery that everyone talks about, Red Velvet.  These cupcakes are $3.25, where I seem to recall the others are an even $3.00.  But they come in a nice box: 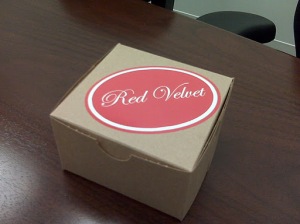 And the box has a cardboard thing inside so the cupcake doesn’t tip.  I broke from my usual vanilla on vanilla test cupcake and chose the vanilla with chocolate frosting.

Isn’t it darling?  The cake was really good, with an almondy thing going on.  The frosting was very pretty, but tasted a bit off.  I can’t really describe how.  Whatever.  Are we done with the cupcakes?  A few people are talking about the place in Georgetown that was on the Food Network.  My associates don’t want to patronize the place because, “I watched that show and I don’t like them.”  Also, there isn’t a great way to get to Georgetown from here.
So.  I am heading home tomorrow and won’t be back for…four more weeks?  Let’s hope I can remember my Metro card.