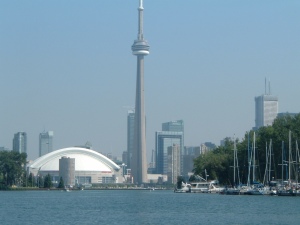 I took the subway down as close as I could get to the “harbourfront”, which in Chicago would be called “the lakefront”. I meant to hike over to the famous CN Tower, but my little guidebook said it would be $20+ to go up the elevator and jump on the glass floor so I opted instead to spend my $20+ on the one-hour harbour cruise, where I took this shot. Cutting off the top of the tower with my over-eager zoom button.

Then I managed some shopping and had lunch, at which time I remembered that my little guidebook also mentioned, several times, a Farmer’s Market on Tuesdays at Riverdale Park. I know how to get there. The little guidebook failed to mention that the Farmer’s Market doesn’t set up until 3pm. Glad I had a new book to read. It wasn’t any better than the Farmer’s Market in Glenview. Seriously, I completely understand why this is a fabulous thing if you live in the neighborhood – the produce looked great – but to specifically send tourists?

A Few Thoughts From the Niagara Falls Tour Yesterday:
Unless I really wanted to take a theatre vacation to the Shaw Festival, I don’t see much reason to spend a week there. Niagara-on-the-Lake is the quaint little town up the road with the B&Bs. It is charming, but so is Galena, Illinois. The Shaw Festival, and I seem to recall hearing there is some Shakespeare nearby, are the draw if I am going to get on an airplane and not go to New Orleans.

We went to a wine tasting, which normally makes me yawn, but this one was a bit different. The local college at Niagara Falls has one of two viticulture programs on the continent (the other being in Napa). What Napa doesn’t have is ice wine. I’d never heard of ice wine before, but it is freaking fabulous. The idea is that they don’t harvest until the water in the fruit turns to ice. Then they pull the grapes and press them before they thaw. They were literally out of the white from last season, so we tried the red. I don’t even like red and I could have had that all day. I nearly bought a bottle, but the bus was ready to go and who wants to carry wine home, anyway. But if anyone is headed out here, go for it.

Of course, the Falls were fabulous and the Maid of the Mist boat tour really is required. I am glad I saw them from the Canadian side. I can’t remember if those were my mother’s instructions or someone else’s, but thank you for that.

The tour company was Toronto Tours.  It was decently run and our guide was pleasant, but they really do cram as many people as possible into a mini-bus.  We had 23 on a bus that sits 24, which means that anyone that isn’t onboard with a partner is going to be getting very cozy with a stranger.  In my case, a twenty-something British smoker that smelled like he had taken the hair of the dog before making our 9am tour.  So did his two buds, sitting behind us.  He was wearing a shirt that said, “The Gun Store”.

If I had to do it again, I would opt for the 7-hour, as opposed to the 10-hour tour.  Part of the shorter day was a group lunch, which was terrible anyway, and one of the stops.  I could have done without them.

Also, I learned an awful lot about the War of 1812. Rant on that later.