My mother bought herself one of those new-fangled coffee machines from Keurig around Christmas.  I imagine you have seen them.  They use little “pods” a bit larger than an old container of creamer and brew one cup of coffee at a time. 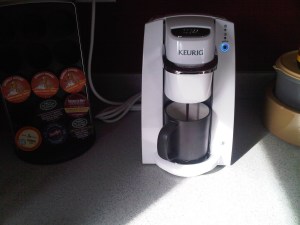 Convenient, if you only want one cup of coffee.  Then one day, she got a really good deal from QVC or HSN or Kohl’s or something and picked up a second one.  So that she has one upstairs and one downstairs.
But only one cup at a time.
So I started to do some analysis.
I believe the machine retails for $90.  (It’s on clearance at Bed Bath & Beyond right now, but never mind that.)  Not a huge amount of money for an appliance, but still a commitment.  But you also have to buy those little pods.  BB&B has them.  $10 for a case of 18.  That comes to 56 cents a cup before you figure in taxes and the ubiquitous 20% discount coupons.  Not bad.
However.  I have been informed that you have to use bottled water, as opposed to tap water in the machine.  I presume that means filtered, but in my house, it comes out of my Culligan water cooler.  That is fine.  But assuming my mother isn’t making stuff up, there is still some cost associated with filtering your drinking water to use in the machine.
I just saw there is some kind of water filter in the machine that has to be changed every once in awhile.  Perhaps you can call that an incidental cost.  I’m not sure.
So, is it worth it?
First, you have to be sure there is a flavor that you like.  I have seen Caribou coffee, Green Mountain and Gloria Jean’s in my house.  No Starbucks.  There are also a few flavors of tea and hot chocolate.  I can confirm that the hot chocolate is acceptable.  Better than Swiss Miss, not as good as Starbucks or McCafe.
Second, understand that “one cup” is eight ounces.  As in half the size of a grande.  So if you are used to that 16 ounces, you will be brewing two cups.  And since only one standard size cup fits under there, you will end up pouring the first brew into your big mug and putting it back under the spout for a second run, with a second pod.  That’s getting two dishes dirty.
There is a little filter pod for those that like the machine but want to use their own coffee beans. It costs $15 and can be reused.  I don’t know how long it will realistically last.  It is probably more cost effective than the pods, but if you were serious about cost effective, you’d probably be brewing your own coffee for real.
So who is the target market?  Not the coffee snobs, or even mass consumers.  I shouldn’t think it would appeal to the commuter crowd – since a travel mug doesn’t fit in it.  I have anecdotal evidence that if you take it to work, your co-workers will start scamming your coffee right and left, and who wants that?  So I’m thinking it is mostly the gadget people, and those looking for a trendy alternative to Starbucks.
That’s my take.

← Planning a Vacation with Alex
Clapton: The Autobiography, by Eric Clapton →