I hadn’t planned on doing Black Friday for real. But yesterday during the Lions game I was going through the paper and had an idea. And then I compared prices. And then I found one that was substantially better than the others. That could only be found before 1pm on Friday.

I was at Carson’s by 7:30 this morning. Shopper’s tip: the Rewards Card discount works on Door Busters. Ha ha!

I can’t go into detail because people for whom I shop also read my stupid blog. But suffice it to say that I rocked the shopping today. In between getting my allergy shot, having lunch at Meatheads, and picking up my brother at the airport.

And I have three gifts wrapped. 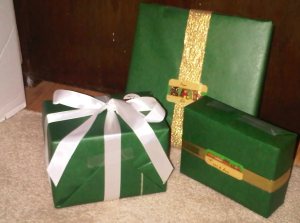 ← Night Castle, by Trans-Siberian Orchestra
What I Learned During the Black Friday Shopping →