Sometimes, There Is Good News

One year ago, a Double Yellow Amazon Parrot named Maxi came to the Rescue with an African Grey named Shadow.  They were both in rather small cages and Shadow was something of a feather plucker.  This is his intake picture.  You wouldn’t recognize him now.  He is absolutely beautiful. 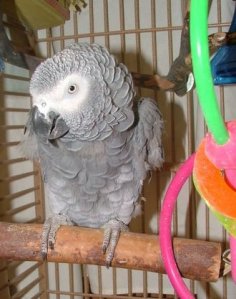 Maxi, you might remember, came home with me for a brief time.  I brought her back because she has some sinus issues that were freaking me out.  I didn’t like the way her breathing sounded so I took her to the vet.  She had an infection and we are half convinced the sinus issues are chronic.  Karen, our Volunteer Director, has started giving her regular sinus rinses and Maxi looks (and sounds) much better.  That is, however, officially beyond my capacity with an Amazon.
Shadow is a lovely bird.  I seriously considered fostering him, except that he shares a name with the dog.  I am certain that would be too much for them both.  But Shadow is a friendly bird that likes attention.  Unless he doesn’t.  And he can shred his toys with the best of the macaws.  We put him in a bigger cage with tons of things to destroy and magically, all of his feathers grew in and he is nothing but charming to friends and strangers alike.

I just received an e-mail from Pat, another volunteer, that today…  He found a home.

A full year he was with us.  A month ago, I would have bet money that a volunteer was going to adopt him before anyone else got the chance.   I am glad I was wrong.  Shadow has a family and we have an empty cage.  For about five minutes.

That is what we call a good day.

← Seducing the Boys Club, by Nina DiSesa
One Step too Far →