Gotta Check in Once in a While

Once upon a time, I had a serious Barnes & Noble habit.  I’m going to call it $100 a month, mostly online.  Then I discovered the used book stores.  And then I started school.  And then came the cable TV and DVR in my bedroom.  Now I am down to perhaps $25 a month.  I still pay for the membership, so I still receive the 15% off coupons regularly, I just don’t use them nearly as often as I once did.

I was in the Glen Town Center this morning and discovered that the Book Market finally re-opened in its new space.  It wasn’t a great store, but I would make an effort to buy something from time to time.  I found a darling children’s edition of Beowulf for $5, so I picked it up.  Then, wandering around, I saw Luke Skywalker’s face on a book:

Scholastic book – I have the Darth Vader one and I rather enjoyed it.  Sixteen bucks.  I put it down.  Then I remembered that I have a BN coupon sitting in my inbox, so I wnt home and got online.  Those who know bn.com know that the minimum for free shipping is $25.  So when I picked up my $16 book for $11.51 I had to “fill out the order”.

I looked at DVDs for five minutes, then remembered that I don’t have time for them and don’t want to spend the money on a TV season right now, anyway.  Music.

You know what I found?  Trans Siberian Orchestra has an album coming out the end of next month.  I loved Beethoven’s Last Night in a Stranded on an Island way – easily in the Top 10.  (Thank you to my friend Rich who doesn’t even remember that I first heard it at his old apartment in Crystal Lake.)  I didn’t look to see what this album is, but I pre-ordered it.  I am expecting a rock opera of some sort.  Of the not-Christmas variety.  Wait – Night Castle.  Does that suggest Halloween?  I going to go back to look.

This is why I should check in at Barnes & Noble more often. 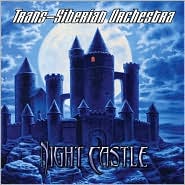