How much do I love New Orleans? Enough that going twice last year only made me want to go again this year. Twice. In the summer.

The first time was in June for a conference. The second was a couple of weeks ago. Third week in July is absolutely as late as I was willing to go and flirt with hurricane season. Turned out to be absolutely correct in that I had the trade off of Hot as Blazes and summer season hotel rates, but I only got really caught in the rain once. But now the city is flooded again.

The idea was to go places that I don’t normally go. I stayed at the Pontchartrain Hotel in the Garden District. Right on the streetcar line. Lovely staff, reasonable rooms. Two first world complaints: They use old school keys and if you lose yours, the fee is $250. And there are no ice machines so you have to call down to have it delivered. Oh, and the mini-fridge is of the mini-bar variety so it really isn’t usable. I was at the corner convenience store at least twice a day.

So. Official Story of Summer Vacation 2017:

After breakfast one morning (doughnut at District Donuts) I walked over to the Lafayette Cemetery. At the main entrance, a man sat in a lawn chair with a cooler filled with bottled water. Selling them for a dollar each. Excellent.

I went in and wandered a bit, then heard what sounded like a crying puppy. I was all, “If this is the beginning of a Crying Puppy Vacation Adventure, I will go off. The. Rails.” Turned the corner and saw a small black cat. She had a pink collar with a heart shaped tag. She let me approach and pet her, but I couldn’t get a read on the tag. Then she strutted away and hopped up onto a tomb and I took this:

She seemed to belong there, so I walked on and saw this: 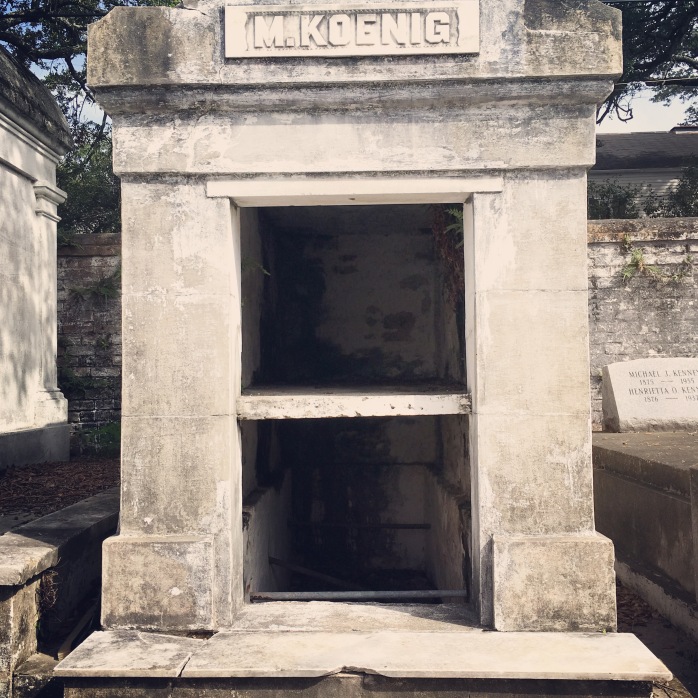 Now, I had heard of Save Our Cemeteries, so I figured this was cool, but still wondered: Where, exactly, are the remains?

A few minutes later, I saw an older man, rather sunburned but quite cheerful. He asked if I was looking for anyone in particular. Apparently, he knew where everyone was buried. I said I wasn’t, but asked if he could tell me about the cat.

“Ah, yes. Her name is Sasha. She lives in the neighborhood and is here all the time. Was she wearing a collar?” I confirmed that she was. “Good. She doesn’t like them and sometimes manages to get out of them. Very friendly.”

He told me that he was a volunteer with Save Our Cemeteries and would be happy to answer any other questions. “OK,” I said. “Can you tell me about that empty tomb? I imagine it is being restored now.” He confirmed that it was. “So where are the remains?”

He led me over to a large tomb that had temporary wooden doors in front. Looked like barn doors. He looked about and said, “I’m really not supposed to do this, but.”

He opened the door and I saw several Rubbermaid containers, like the ones my mother uses to store Christmas ornaments, on the bottom “shelf”.

He explained that because of the heat and humidity, the remains (including the caskets) decompose very quickly. If I looked up on the top shelf, I could see some actual bones. I stood on my tip-toes and looked.

“You’re going to have to get closer,” he said.

“Yeah,” he said, closing the door. “I’m starting to smell something unpleasant.”

We talked some more..about Lafayette (I was pretty sure he had no idea what he was talking about) and Confederates and restoring tombs.  And he told me that you can only visit the cemeteries by the French Quarter if you are with a tour group.  I certainly hadn’t needed a tour group when last I visited..but that was pre-Katrina.

I asked how I might contribute to the work of Save Our Cemeteries. “You can just give me cash.”

Well. It took me 2.4 seconds to decide this was probably a con. But Dude gave me an official vacation story and if he was misrepresenting himself as part of a charity, that was on his conscience. So I handed him some cash and moved on.

Later (like five minutes ago when I checked to make sure it was the LaFayette Cemetery that I visited) I saw that empty tomb.  It was always empty! Dude was full of it.

And I regret nothing.