It is not news that my employer freakin’ rocks.  That’s why I work there.  Small perk:  each year every department has a budget to do a group outing.  Most departments just do a long lunch somewhere, but my people – most of us, anyway – want to do something.  A couple of years ago, we went to Gameworks.  When one person left right after we ate, and another pocketed the game card to give to the grandchildren, we were pretty disappointed.  So.

Where do you go when most people want to do something, but others just want to eat?  My friend and colleague remembered her kid once going to a party at Morkes Chocolate in Palatine.  It was very easily within the budget and I voted Yes.

When you walk in the door, it looks like a better than average chocolate store.  Then they have the party room in the back.  Where we found a table full of these:

We were each asked if we preferred milk or dark chocolate.  When I am eating it straight up, I prefer milk chocolate.  But something told me that with all of this sugar, I’d better go dark.  We were all sort of staring in awe at our trays, and when the staff came back with our fondue cups, one remarked, “This is the quietest group I have ever had.”  Because we aren’t six.  And we didn’t have any sugar in us yet.   According to my phone, it took about thirty minutes to turn that tray into this: 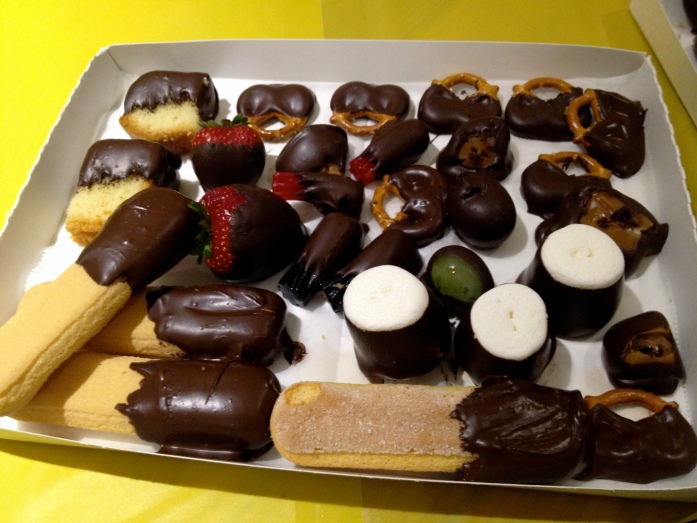 I texted this pic to my mother, Kay, who told me to leave it at the office.

I am pretty sure dark chocolate was the correct decision.  It was funny watching how each person attacked the project.  I was going for neatness.  Not because I am particularly neat or even artistic.  I just didn’t want to embarrass myself by making a mess.  Also, in the great scheme of eating chocolate covered things, I like to know what I am eating.  So I didn’t fully coat anything.  My boss went for efficiency and was finished first.  In hindsight, he said that his method made for some really thick chocolate.  The best of us was C, who said she had experience from working in a doughnut shop.  Awesome.  Next up was truffle making.  We started with empty shells:

Because a few of our group stayed behind for last-minute-work purposes, we took their trays and made boxes for them.  Well.  I didn’t, because I was too slow.  But someone did.  And then we had pizza.  I ate my chocolate covered pineapples and banana and one of the sponge cakes.  The fruit was better.  Then I packed up the rest.

Two of us left nearly full boxes in the lunchroom for our very appreciative colleagues.  I brought mine home so as to keep the strawberries and caramels and make my mother take the rest to her office.

Category: Not a Foodie, Talking Shop

← Another Reading Update
The Happiness Project, by Gretchen Rubin →