All last summer I waited for Gibbs to be old enough (he didn’t finish his puppy shots until August) and mature enough to start doing charity walks with me.  There are several local animal shelters and they all have such events when the weather is warm.  However, since Gibbs has trouble with strangers, crowds and any other unfamiliar situation, Fiona has been elected.

Heartland Animal Shelter in Northbrook had a Run/Walk yesterday.  I didn’t join a fundraising team.  I just paid my registration in advance and showed up.

The 10K started at 8:30 in the morning and the walk was at 9:30.  I arrived somewhere between 8:30 and 9:00 thinking that Fiona would want to smell everything and perhaps do her business before the walk.

I was right on one count.

She behaved beautifully.  Politely introduced herself to people and dogs alike.  She even let herself be bear-hugged by a young girl. (The child did ask if she could pet my dog and followed my instructions – “Go slow and be sure she sees you first.”)  Also important – she was very patient as we waited for people to gather.  Gibbs would have been whining to do something.

She pulled on the leash as the walk began and she stopped to do her business after about three minutes.  (Never leave home without the baggies.)  But she settled down eventually and went with the flow.  It was only a 2K, which was vaguely disappointing because by the time I had her settled to the pace, I could have gone much further.

Heartland had several great sponsors – Whole Foods, Einstein Bagels and Dairy Queen are some that come to mind.  I happen to know that Wags on Willow was a sponsor, but they couldn’t be there with a table because their complex is doing a sidewalk sale this weekend.  And Sit Means Sit, a dog training service, had a demonstration.

Sponsors setting up their tents.

The trainer from Sit Means Sit warming up the dogs.  One fully trained and one puppy. 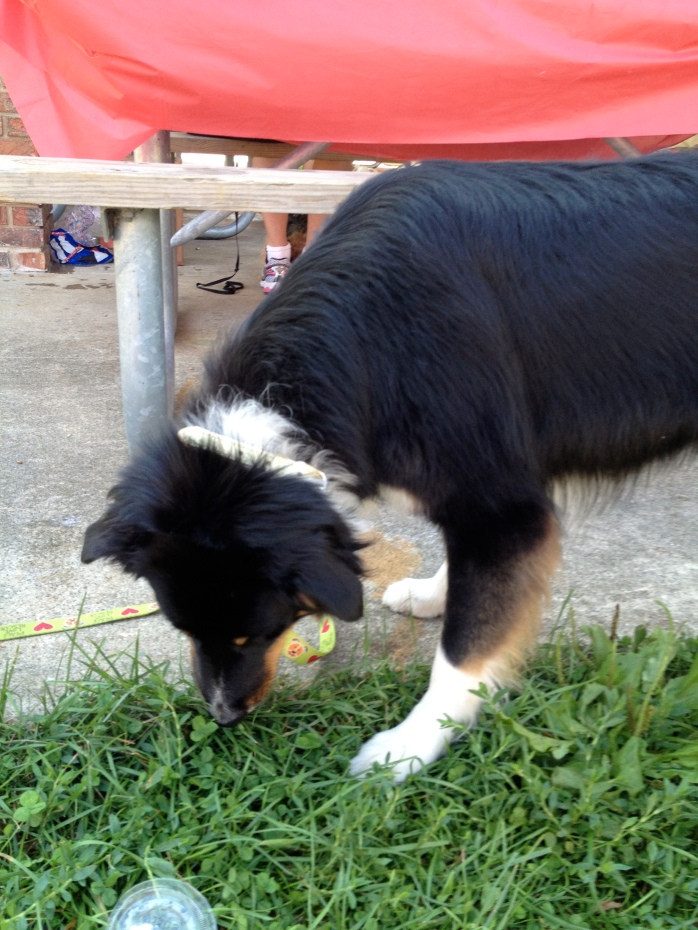 Fiona taking on the doggie ice cream provided by Dairy Queen.  She pretty much has the whole cup in her mouth.  She earned it.

Next up:  Orphans of the Storm has a 2-Mile Walk on August 18.  And Wright-Way Rescue, which brought us Gibbs, has a 5K on October 6.