Today I took Fiona to Evanston C.A.R.E.‘s dog wash fundraiser.  10 bucks for someone else to wash your dog and they had lots of toys being sold for peanuts, including two of Gibbs’ favorites.  I actually made them take more money than they charged.   Fiona did fine, but she was not pleased with being hosed down. 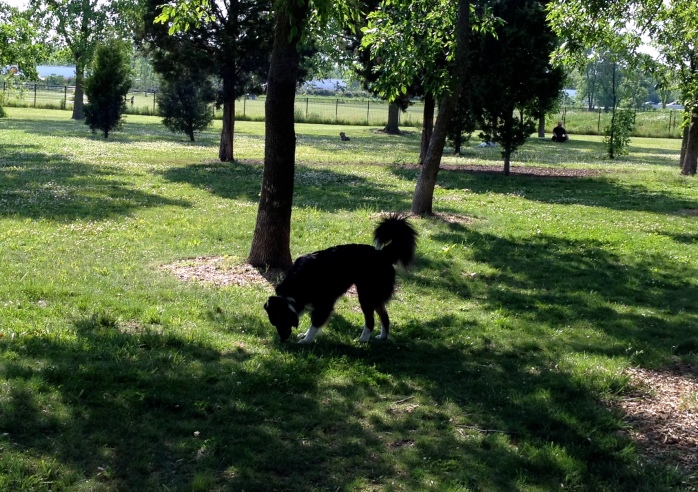 She was perfectly pleasant, greeting dogs and people politely and she pretty much came when she was called.  She didn’t play the way Gibbs plays, but she had a lot of exploring to do.

When we went back with Gibbs, he was all excited to play, play, play.  They did some romping together, but it is pretty clear that when we are at the dog park, Fiona has a job:  to keep the pack together.  She will probably run when he runs, although when it was time for some serious Fetch with the Chuckit, she went two rounds and then lay down in the shade.  Gibbs will go until he is sick if I let him.

I just read that you shouldn’t take your dog to the dog park this quickly – not before you are sure of her behavior and not before you are sure of her Recall.  Again, she did fine.  (The same article advised not to take a puppy because a puppy might not understand the other dog behavior, might get his butt kicked and then be traumatized.  But Gibbs was a veteran of Doggie Do Rite, so I took him at 6 months in accordance with the dog park rules.)  But the really good news is that it as clear to me from watching them that they understand they are a pack.