Another Trip to DC

Back in Washington this week, but everything was goofy.

United Airlines shifted stuff around at DCA, so I was all confused.  I stayed at a different hotel, so I was more confused.  L’Enfant Plaza Hotel is not fancy.  I understand from my meeting planner guy that I was on a not-renovated floor that could use some renovation.  But the location is great, the room was clean, the bed was comfortable and it was much quieter than the Holiday Inn Capitol.

I arrived at the office, thinking I was going to grab Stefphanie and go to our favorite deli for lunch.  But then I saw this: 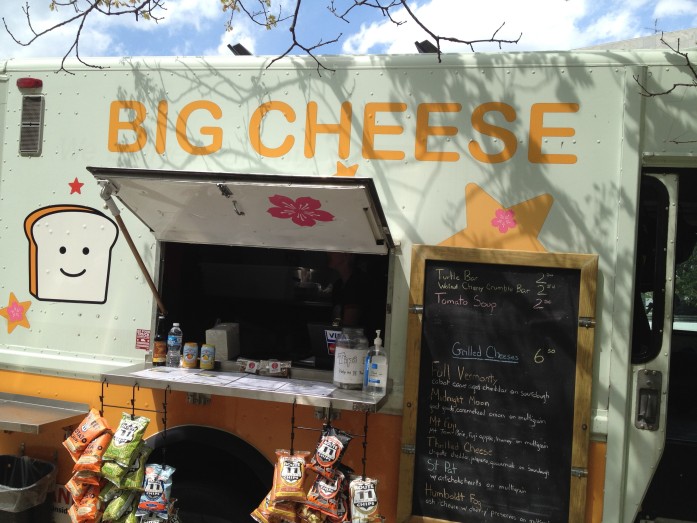 I seemed to recall my online friend Darth Kittius mentioning it once.  She does DC restaurant reviews on her blog sometimes and has included the food trucks.  I ordered the Mt. Fuji – whole grain bread, brie and fuji apples.  It would have been the best grilled cheese ever except that I ate it with my favorite chips – dill pickle – and the sweet of the sandwich didn’t quite complement.  But I would totally eat there again.

So the meetings all went well and then last night I had an awesome dinner.  I don’t normally do the fine dining thing on the road, but our 401(k) people were in town and Stefphanie made the reservations. She knows that I am a picky eater.  We went to Central Michel Richard, which seems to specialize in upscale comfort food.

My friend Jim agrees with me that if one is at a nice restaurant and Mac & Cheese is on the menu, one must really go for it.  So he ordered the fried chicken, I ordered the Lemon Chicken burger and we split a side of the macaroni.  The Lemon Chicken burger is chicken that is grilled and kind of diced up, then mixed with just enough lemon-y batter to hold it together in a patty and then seared.  Very tasty and not greasy at all and serious points for creating something interesting that even I will order.  I tried Jim’s fried chicken and it was also fabulous.  David ordered the lamb which I did not try, but he was quite pleased.

Happily, I saw the dessert menu early and decided against appetizers.  We ordered the apple tart, Michel’s chocolate bar and the lemon tart for the table.  All three came with ice cream.  I would order all three again.  The apples were positively infused with cinnamon-y goodness, although my standard complaint of Too Much Pastry Not Enough Fruit applies.  The chocolate bar had a wafer-y thing going on and avoided being too heavy or too light.  The lemon tart had just the right tartness and the best merengue I have ever had.

This meal was so good I wish I had taken pictures.  We had reservations at 6pm and got in just ahead of the crowd.  Highly recommended.

Category: Not a Foodie, Travel, Washington

← Year of Wonders, by Geraldine Brooks
What the Dogs Did While I Was Out of Town →