So I made a contest to name my dog.  I posted my lame straight-from-the-Pet-Expo picture and offered a gift certificate to the person that came up with the name.

I haven’t gotten so many responses to a co-worker poll since that one about Thanksgiving Dinner.  Tons.  It was crazy.  Since I wrote the piece myself (and I have borrowed from my blog for book reviews in this same employee newsletter) I don’t think I will be busted for copyright infringement to reprint this:

I was interested to see an overwhelming trend in suggestions: names that are also suitable for people.   In my day, dogs were named, “Scruffy” and “Scamp” and “Patches” and cats were named “Fluffy” and “Spooky” and “Socks”.

The Most Votes went to “Abby”, which I had to reject because one of my girlfriends just named her baby Abby.  And it wouldn’t exactly lead me out of the NCIS trend.  Other multiple count suggestions were:  Lola, Bella, Lady and Addie.

I also received several Scottish names, because I said she is a Border Collie mix.  People – my mother sent me a website with a database of Scottish names!  This was particularly funny because when I received her paperwork, it said she is a Bernese Mountain dog mix.  I seem to recall someone making that suggestion from her picture.

(Truth be told it said, “Burmese Mountain Dog” but since I have never heard of such a breed, I am going to presume “Bernese” was what was intended. )

Here is a somewhat better picture.  I still think she looks like a Border Collie. 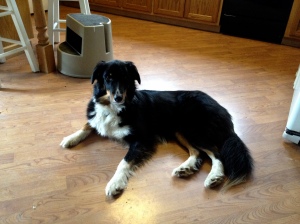 She has the longer, pointier snout and weighs in the neighborhood of 40 pounds.  And look at that tail!

After consultation with my nephew, Alex (age 7) we have settled on the name Fiona.  It was suggested by Sarah.  Thank you, Sarah.  That Amazon gift certificate is on its way!

← So How is Gibbs Getting Along with the New Addition?
One More Thing to Love about My Library →