A Saturday with Alex

Alex came out to spend the day with us yesterday.  My mother picked him up after his basketball game and met me at Noodles.  He had three baskets, one rebound and an assist.  He said that he liked basketball as much as baseball and football and liked all of those better than soccer.

Then we tried something new: Make a Messterpiece calls itself a “creative studio”.  It has tables and canvases for painting and several other activities.  Alex said that he would like to try the Kitchen one and the Drumming one.  In the Kitchen, the kids made  Astronaut Pudding.  It was basically instant pudding that you put together in a ziploc bag and the kids liked it a lot.  The idea is that you cut the corner off the bag and slurp the pudding out of the bottom. 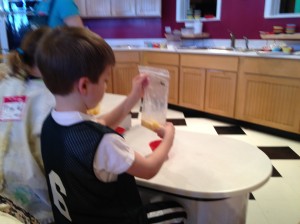 Then we went to the drumming place.  It is like and old heavy metal video with the colored lighting and lots of water when you are banging on the drums.  Alex changed his mind and didn’t want to go in.  He determined that you shouldn’t have to wear a raincoat and boots to play the drums.  Can’t argue with that.

Then we made a painting with the bubble machines – I forgot to take a picture of it – and headed out.

Then I took him to the Library to find a puzzle to borrow and see if the Used Book Store had any Magic Tree House books to take home.  It did.  He didn’t have them at home, but had already read them.  I asked if he really needed them if he had read them already.

Can’t argue with that, either.

Then we went home, worked on puzzles and watched the Senior Bowl before ordering pizza.  I am sorry to say that Gibbs still doesn’t like strangers in the house, but he settled down and kept quiet as long as he was left alone.

We had pizza for dinner and that was the day.