At eight months, Gibbs is a teenage boy that is always hungry.  He is either running around like a crazy dog or asleep.  Or scavenging for snacks.  In fact, yesterday he made his first snack swipe.  My mother left spinach dip on the coffee table while we were in the other room.

Thus we are reminded that there is a difference between puppy-proofing a house and dog-proofing a house.  He hasn’t discovered the wonder of garbage cans yet, but that can’t be far behind.

Gibbs was most confused by the loss of Spooky the Cat.  But he is having a good time with Kiwi the Grey: 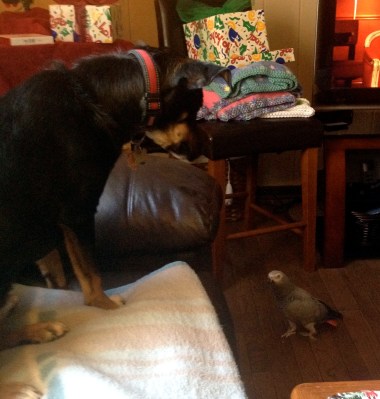 She is teasing him.  About ten seconds after I snapped this, he jumped to the floor and she flew to her perch.  And he came back and lay down for a Bears Game Nap:

He knows several commands:  Sit, Wait, Off, Come, Go to Your Place..and his Leave It isn’t half bad.  We are working on Lie Down and have just started on Paw.

We haven’t been to the dog park lately, but Gibbs continues to go to Doggie Do Rite three days a week.  He has gotten better at meeting people, but still doesn’t like strangers in the house.  Christmas ought to be fun.

The more time I spend with dogs, the more I think that a having a well socialized pet is at least as important as having an obedient one.   I am optimistic that Gibbs will be both.

← Wrapping for a Good Cause
The Christmas Train, by David Baldacci →

3 Comments on “At Eight Months”