After my last visit to the cupcake truck in Washington, I told several colleagues that they were insane.  The lemon cupcake was clearly superior to the red velvet.  A non-zero number didn’t even want to talk about Curbside Cupcakes, because just that week a colleague in PR had brought pumpin cupcakes to the office and they were the best thing ever.

So the next time I happened to be passing by the lady’s office, I told her that the building had judged her cupcakes better than Curbside’s.  She laughed and said it was a recipe from Emeril.

I told my mother this story when I came home and she went online to find these mythical cupcakes.  Before tracking it down, she found one from Betty Crocker that involved using a dry yellow cake mix, a can of pumpkin and some other stuff.  She ran with it: 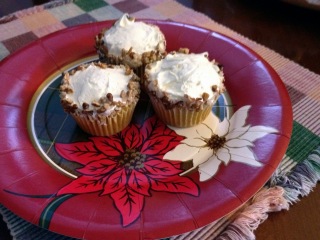 Category: Not a Foodie

← The Lake of Dreams, by Kim Edwards
November Blanket Day and Blanket 62 →