I have been to New Orleans plenty of times, but this was my first visit to the Voodoo Museum, which is pretty lame of me since it is in the French Quarter and most of my excuse for not doing things is, “I didn’t set foot outside the Quarter”. But Voodoo has always scared me.

Upon entering the building, I was greeted my a very nice man with a very thick southern accent that gave me the short-short version about how voodoo came to the U.S. with the enslaved people from west Africa. Of course they weren’t allowed to practice their own religion, but they found enough similarities between voodoo and Catholicism to be able to hide it in plain site. The nice man continued on to say that voodoo traditions deal mostly with calling upon the spirits for good things like love and good luck and prosperity and it is really only Hollywood that makes it scary and evil. Then for five bucks I went back to see the artifacts. The nice man said that I could take pictures.

This is an alter to Papa la Bas, who seems to correspond to St. Peter:

Then there was the man with the alligator head, surrounded by lots of bones:

At his feet was another alter-like display. I forgot its significance: 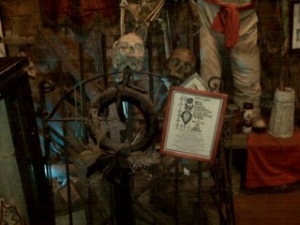 They had a wishing stump with instructions and everything. I considered using it, but you have to write your wish on a piece of paper and leave it in the stump. I can’t think of anything more embarrassing that having my wish read and mocked by a voodoo queen.

Anyway. I was all about the beauty of hiding one’s faith in the traditions (superstitions?) of Catholicism. But I don’t see why it requires so many carcasses. I didn’t even take pictures of the worst ones, but when my friend Rich tried to tell me that it all made sense because Catholicism was all about a gruesome medieval torture device, I countered that a model of a crucifix was not the same as have an actual petrified cat hanging from the wall.

On the way out, there were voodoo dolls and books. And snakeskins and chicken feet. And I saw a sign in the window that suggested the nice man that gave me the short history was also a practitioner available for consultation.

Then I got the hell out of there and went for some iced coffee.

← Read Some Books, Spent Some Money, Drank a Lot of Iced Coffee
Three Roads to the Alamo, by William Davis →