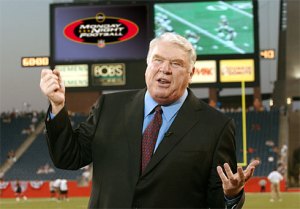 When I heard John Madden is retiring, I thought he must be sick. But he says he isn’t. He is 73 years old and wants to enjoy his grandchildren. Michael Hiestand at USA Today wrote the nicest article and if I wasn’t already aware, it became quite apparent as I read through that I am going to miss the guy.

Sunday Night Football is the best thing since Monday Night Football. Madden isn’t the entire reason, but he’s a big part of it. The reason that we should all kiss him – which I didn’t even know until today – is that he is pretty well responsible for our TV screens coloring in the unofficial first-down marker.

I love the unofficial first-down marker.

The great Mike Singletary is quoted as saying, “He called the game the way players and coaches like it to be called,” but I really think he called it like a fan. A fan that knew every possible nerd detail of the game, and then made up some new ones. For fun.

My personal favorite: “One knee (down) equals two feet” became, “One (butt) cheek equals two feet”. To explain when the ball is down or whether the player stayed in bounds.

I will not miss “turducken”.

Here’s my question. Once he is retired, will the Madden Curse live on?

Category: In the News, sports