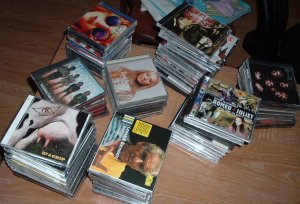 When I started loading my first iPod, I was picking and choosing my music. It held only 4GB, so for the most part, everything on there had a purpose. Now I am loading the Grandaddy iPod with everything in the house. I am astonished by some of the things I found in my collection. We can discuss that when I am finished (when did I buy the Animaniacs soundtrack?). But it is all going in there.

John Scalzi had an essay in his book about his daughter discovering that old horrid tune, “The Final Countdown”. He made a point of sitting her down and playing her the entire thing so as to teach her just how terrible it is. He doesn’t say whether he had a copy already in the house. But that is a purpose – so I felt a bit better about this project.

The picture above represents the weekend’s progress. First I thought I would start at the beginning of the alphebet. Then decided I wanted all of the soundtracks first. Then I wanted everything where I have a whole bunch of CDs from one artist. Then I decided that I don’t need a pattern – it is all going in eventually.

← McCafé
Your Hate Mail Will Be Graded, by John Scalzi →